(Wikipedia) The Colt Paterson is a revolver. It was the first commercial repeating firearm employing a revolving cylinder with multiple chambers aligned with a single, stationary barrel. Its design was patented by Samuel Colt on February 25, 1836, in the United States, England and France, and it derived its name from being produced in Paterson, New Jersey.
... The Republic of Texas purchased 180 of the revolving shotguns and rifles and a like number of handguns for the Texas Navy in 1839. When Samuel Houston disbanded the Texas Navy in 1843, Captain Jack Hays armed his company of Texas Rangers with surplus stocks of the pistols. The repeating handguns became very popular with the Rangers, providing them with sustained firepower against their Comanche adversaries. Continued
No comments: 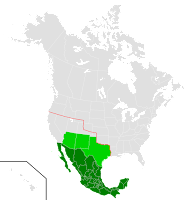 (Wikipedia) The Zimmermann Telegram (or Zimmermann Note or Zimmerman Cable) was a secret diplomatic communication issued from the German Foreign Office in January 1917 that proposed a military alliance between Germany and Mexico in the event of the United States' entering World War I against Germany. The proposal was intercepted and decoded by British intelligence.
Revelation of the contents enraged American public opinion, especially after the German Foreign Secretary Arthur Zimmermann publicly admitted the telegram was genuine on 3 March, and helped generate support for the United States declaration of war on Germany in April.
The decryption was described as the most significant intelligence triumph for Britain during World War I, and one of the earliest occasions on which a piece of signals intelligence influenced world events. Continued
No comments:

The Battle of Buena Vista 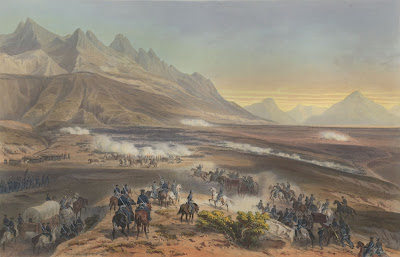 The Battle of Buena Vista (February 22 – February 23, 1847), also known as the Battle of Angostura, saw the United States Army use artillery to repulse the much larger Mexican Army in the Mexican–American War.
Buena Vista, a village in the state of Coahuila, is seven miles (12 km) south of Saltillo, in Mexico. Continued
No comments:

(Wikipedia) The Connally Hot Oil Act of 1935 was enacted in the wake of the Supreme Court's decision to strike down Section 9 (c) of the National Industrial Recovery Act (NIRA) in Panama Refining Co. v. Ryan. The act gave the President authority "to prohibit the transportation in interstate and foreign commerce of petroleum... produced or withdrawn from storage in excess of the amount permitted... by any State law." The act was named after Senator Tom Connally. Continued
No comments:

(Wikipedia) Captain Lazarus Stewart was an 18th century Pennsylvanian frontiersman and leader of the Paxton Boys. He achieved notoriety by leading the massacre of the Susquehannocks in 1763, and was a prominent military commander — on the Yankee side — in the Pennamite Wars. He met his death in battle with the Loyalists and Iroquois at the Wyoming Massacre, in an attack precipitated by his own rashness. Continued

(Wikipedia) The French colonization of Texas began with Fort Saint Louis in present-day southeastern Texas. It was established in 1685 near Arenosa Creek and Matagorda Bay by explorer Robert Cavelier de La Salle.
He intended to found the colony at the mouth of the Mississippi River, but inaccurate maps and navigational errors caused his ships to anchor instead 400 miles (640 km) to the west, off the coast of Texas. Continued
No comments:

(Wikipedia) John Henry Tunstall (6 March 1853 – 18 February 1878), born in London, England, became a rancher and merchant in Lincoln County, New Mexico, where he competed with ethnic Irish merchants and politicians who ran the town of Lincoln and the county.
He was the first man killed in what developed as the Lincoln County War, an economic and political conflict that resulted in armed warfare, perhaps compounded by ethnic rivalries between an Irish group and others of English descent. Continued
No comments:


(Wikipedia) Charles McColl Portis (December 28, 1933 – February 17, 2020) was an American author best known for his novels Norwood (1966) and the classic Western True Grit (1968), both adapted as films. The latter also inspired a film sequel and a made-for-TV movie sequel. A newer film adaptation of True Grit was released in 2010. Portis has been described as "one of the most inventively comic writers of western fiction." Continued
No comments:

(The Daily Beast) ... One thing to know right off: Log cabins weren’t always adored here in America. Originally brought over in 1638 by settlers of short-lived New Sweden, not Pilgrims or Puritans, the log cabin was spread across the American colonies primarily by German and Scots-Irish immigrants, mostly dirt-poor folk looking for new lives in the New World. Log cabins therefore spent most of their early existence here disdained and dismissed, described as “miserable” and “wretched.”
And the people within said cabins weren’t beloved, either. Benjamin Franklin spoke for an entire generation when he told his grandson that there are “two sorts of people”: “Those who are well dress’d and live comfortably in good houses … who are respected for their virtue.” And then, “The other sort … poor, and dirty, and ragged and ignorant, and vicious, and live in miserable cabins.” In other words, log cabin living was not enviable and the people within were even less so. But that all changed around the late-1820s ... Continued
No comments:

(Wikipedia) George Washington Coe (1856–1941) was an Old West cowboy and for a time gunman alongside Billy the Kid during the Lincoln County War.
Coe was born in Missouri, and ventured to New Mexico Territory in his youth, around 1871, alongside his cousin, Frank, to work on a ranch near Fort Stanton belonging to a cousin, and for a time during this period they lived near Raton, New Mexico.
... George Coe found himself dragged into the Lincoln County War by way of his own unjust arrest by county Sheriff William J. Brady. Coe and his cousin would join the Lincoln County Regulators, riding with Billy the Kid, and facing off against the "Murphy-Dolan Faction" and their supporters, to include members of the Jesse Evans Gang and the John Kinney Gang. Coe figured prominently into the events of the final Battle of Lincoln between the two factions, and was eventually arrested for the murder of Buckshot Roberts, a shootout which became known as the Gunfight of Blazer's Mills, and in which he lost a finger. Continued
No comments:

(Encyclopedia of the Great Plains) Defined by the dramatic landscape of the Llano Estacado, a vast mesa 3,000 feet high and 300 miles across with accompanying canyonlands, the high plains of Texas are bordered by Oklahoma on the north, the Edwards Plateau on the south, New Mexico on the west, and I-35 on the east.
This land, commonly known as West Texas, possesses a distinctive regional culture shaped by the cattle, cotton, and oil industries, a perennial wind, and a seemingly endless sky.
One of the most meaningful manifestations of this regional culture is a tradition of music making that has influenced the shape and style of popular music since Amarillo's Eck Robertson made the nation's first country music recording in 1922. Continued
No comments: